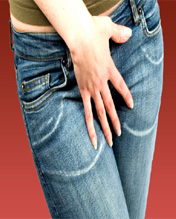 Does life feel like one huge pain in the Vulva??? I have created this forum so that women living with Vulvodynia (Vulva Pain) can have a place to share, chat and support each other.

The link to my research project is in the Announcements forum, please participate if you can!!
Log in
Latest topics
» How I cured my Vulvodynia!

» 7 months since the diagnosis

» Gabapentin Gel. or other topical creams

» 6 days post Vestibulectomy - Is this normal?? please tell me about your postop healing process!

» Vestibulectomy next week in London!! - questions!!

» Dating with Vulvodynia and Vaginismus advice

Gabapentin Gel. or other topical creams

Hi I have been suffering for some years with this abominable pain. I have tried most of the systemic drugs , I asked specialists and Doctors if I could at least try a topical treatment but because this requires a special prescription have been refused Has anybody had a chance of trying these? Thank you I will try to put a link on to some of the research into Gabapentin Gel. Thanks.

I'm trying to work out the best cushion to get for my vulvodynia.  I suspect that I could have pudendal nerve involvement (the aching and burning pain is from vagina to clitoris) and I have rectocele and some tailbone pain too.

I have seen some good reports on older threads regarding the Putnams pressure relief cushions....with some ladies …

I posted on here back in March 2017 having just got a diagnosis of vulvodynia after a few months of relentless and acute pain. I was desperate, I was hurting, I was scared I would never know life without pain there again.

hey, im 19, ive been struggling with this almost a year. The first week I became itchy I went in to check about a yeast infection another week later. I have been to 10 different doctors a total of about 15 appointments for this problem for the past 11 months. I have been tested for everything including having a biopsy. I was first told basically to just go home and use hydrocortazone, then I went …

Hello, I have just been diagnosed with unprovoked vulvodynia. Im really scared and worried. It burns a lot and it hurts to sit down. I have been prescribed amitriptyle 10mg. Can anyone give me some hope that I can get better from this condition. Feeling low and depressed.

I'm wondering if anyone has any experience with the MonaLisa Touch treatment for Vulvodynia? My pain started when I went on HRT(pill) for anxiety mainly and my pain abruntly stopped when I stopped HRT. However, when I started on the HRT patch (at my dr's suggestion), the pain returned and has never left. That was 7 years ago. I found MonaLisa Touch on the internet purely by accident …

I’m so glad I’ve found a place where there are others who understand how I feel!

So this is my story:-

I’m 36,  and 4 months ago, whilst innocently sitting in bed reading I experienced a very sharp stabbing pain in my clitoris. It last only a few minutes and then subsided as quickly as it came on. It put it down to “one of those things”.  The following morning I woke up …

New and need advice and help

About three months ago, I started having vaginal and vulval itching. Then, about two months ago, my vulva started to feel painful and look swollen, so I went to the doctor. I was tested for herpes, chlamydia, and gonorrhea which all came back negative. I also had to do a vaginal swab test and the only thing that came back positive was yeast infection. I was prescribed hydrozole …

This might be a little long but it's been such a long time I've even been able to talk about my problems openly thank you in advance for any helpful advice.
So ok I'm 24 I've been having this problem for over two years seen quite a few doctors and obgyns alike and nobody will take me seriously I have had a few utis and yeast infections and even bv once and this all started after one of the utis …

When I was with my boyfriend a few months ago, we decided to eventually try to have sex (both virgins, believe it or not). I'm 25, and it was my first attempt (grew up in a super religious family--I've been gradually moving away from that), so I decided to go to a gynecologist to get a check up and get on birth control.

I've never found tampons comfortable or possible to wear, so I've always stuck to pads. I thought this had something to do with me being a virgin, but the more I thought about it, the more I realized that my first sexual experience would probably require me to be under the influence of something to relax me.

Instinct led me to investigate, I guess.

The first time the boyfriend got intimate with me (fingerplay), it was ecstasy, but I was also in extreme pain. I thought it was just because I wasn't used to anything like...that. I'm a good actress, though so I just endured it.

I decided to go to the gynecologist after that, and they couldn't use a speculum or really perform a pelvic exam--it felt like acid was being poured on a certain spot on my vagina anytime they tried to get something to enter, and getting anything entered was also difficult. They managed to perform a pap smear with a needle. That was a trip and a half.

They eventually gave me lidocaine and birth control--said that I needed to practice entering things like dildos and to use the lidocaine to dull the specific spot (near the perineum or base). I basically screamed anytime they touched that area. They finally diagnosed me with vulvodynia and possibly vaginismus. Thankfully, the pain is very localized, so if worse comes to worse--surgery.
The birth control, unfortunately, made me ill (I started having panic attacks from increased anxiety as a result of the birth control) and the doctor said it was because my liver couldn't handle the artificial hormone. It was bad, but it wasn't terrible--the only thing I requested of my boyfriend during this time was for him to call me every day. I've heard of much worse issues and I was hiding my mood swings and anxiety attacks fairly well, comparatively (compared to other women I've known who had this problem).

I tried discussing these issues with my boyfriend, but in the end, he said this (the vulvodynia and the birth control problems) made him lose some attraction to me, and we split under the pretense of him simply needing to complete nursing school before getting into a relationship (oh the irony).

Honestly, I've never been more humiliated and upset in my life. I was being the honest and upfront adult...and instead of being supportive, he turned into an absolute child.

He wants to eventually reconcile and try dating again, but honestly, I expressed medical concerns in a way that I thought would ease his anxieties, and he was unbelievably immature about it. Not sure if I want to put myself through that again.

I loved him, love him still, but the fact that he said, "You became unattractive to me when you got ill" --this coming from a nursing student--was unconscionable.

So, for now, I am still dating around, but clearly, sex isn't really an option right now. I'm hoping to find some solace in these forums, hopefully on the road to recovery. I've bought a dilator kit, a journal kit for recording the issues...and honestly, I'm hoping things will look up so I can eventually have sex and have sex without pain too.

That would be nice.

Being honest was absolutely the right choice, and I'm sorry that he reacted in the way he did. Just know that's HIS insecurity and selfishness and does not reflect on you. You deserve to be loved through the good times and the bad.

Have you thought about seeing a pelvic floor physical therapist? You may have better results that way than using dialators on your own without guidance.

If I knew where to find a pelvic floor physical therapist, I probably would. I live in an area where "sex is sinful and gynos--or anything in relation to them--are sinful" therefore, finding one in-state is going be extremely difficult. I'll try the dilators first and if they don't or if I feel that I'm not making progress, I will definitely search out of state if necessary because getting on top of this is a priority goal.

I did a quick search on google for pelvic floor physical therapists in Mississippi, and I was able to find a few right away. So they are available in your state.

Good luck with the dialators!

You have every right to be upset. I am a nurse and if he is wanting to be a nurse himself, I would advise that he try to be more understanding and sympathetic. He reacted childishly and without compassion. Please do not believe this says anything about you. I do hope you start to feel better soon.